The Mission of Bruno Gröning

Lecture on the occasion of a spiritualistic conference, Munich-Grünwald 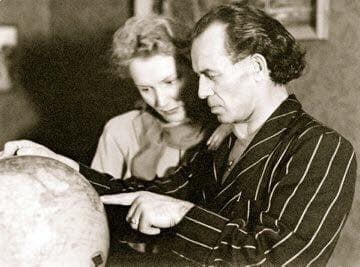 Even during his lifetime, a noticeable dispute about Bruno Gröning appeared in public. The pros and cons have left larger and smaller shadows in people’s consciousness, so that very few could see who he actually was. Shadows cannot be wiped away so easily, cannot be removed so easily in a non-violent sense, since the pros and cons can always appear. Many of them knew Bruno Gröning well, but very few of them recognized him inside. They just wanted to be healed, and they would have gone straight to any new healer; So would have changed the healer and not thought about it.

It is good that people hope for a cure, as long as they do not cling to the healers and suck off life force from them. You can also go to any healer, but you should think with your heart that the “IT” flows through every healer, the divine power, the power of health, because illness is evil.

Bruno Gröning has repeatedly emphasized that one should not focus one’s thoughts on one’s body, but rather on “IT”, on the divine power, on health and on the wealth of health. Health is actually a priceless wealth, but health is also, if it is real, the omnipotence of God, which can be realized in every single person when he opens up completely and takes the “IT” into himself.

Bruno Groening was not in the sense of scientific outlook formed like a professor or a doctor. He didn’t even want to be, because then he wouldn’t have been able to demonstrate the real and true power of God.

His work and actions were primarily aimed at dissuading people from their thoughts about the disease – that is, the evil. Again and again he emphasized not to focus on fear or anxiety, all these thoughts hold on to the illness – the evil – and the healing divine power cannot be absorbed by the person seeking help, cannot spread within him. Man unconsciously shields himself from the healing current (Heilstrom) with such thoughts. In order to be able to receive this as strongly as possible, it is necessary to switch off the own radiation, i.e. all idiosyncratic, selfish and disturbing thoughts as far as possible. In order to partake of divine grace, the soul must open to the divine in grateful piety. We must become like children in order to receive the divine good. Not underage and without responsibility, but without guilt, without envy, hatred and without desire for worldly power; earthly possessions and enjoyment.

Again and again we find the religious demand expressed by Bruno Groening that the human being must switch off his “ego” and forget that the divine power can only come to revelation in the believing soul that is turned towards the good and the truth. Experience has shown in numerous cases that a humble person, who humbly and reverently subordinate their fate and healing to God’s decree, received the Heilstrom most strongly and thus achieved full healing. However, those who proudly, self-confidently and demandingly demanded healing, prevented the higher power from flowing in through their selfish will and were only able to achieve their healing to a small extent or not at all. With regard to this importance of the state of mind, the words of Bruno Groening are to be understood when he kept saying: “Do not require but aquire!”

Bruno Groening couldn’t and was not allowed to say everything he knew, of course, because he spoke to people from all walks of life, including very simple people; they could only understand him with the help of simple language, namely the language of the heart. He was a guide. If he then showed them some parables, it could well happen that these images were sometimes called “illogical” by others. Mostly it was those who believed that they were elevated above the knowledge of Bruno Groening, i.e. those who were intellectually educated. Those who were more filled with the academic spirit than the divine spirit and, of course, first and foremost the obvious enemies. He had had enough of that sort to overcome during his ministry. He had friends and enemies.

Sometimes – while he had to do a lot – people came by his side who supposedly wanted to help him, including so-called “managers” who were dominated by organizational ideas. They were mostly also attracted to thoughts of money and success. So they were already in completely wrong waters during their approach. However, since Bruno Groening did not make violent decisions against anyone, but acted non-violently, exuding patience; he did not reject them, but tried again and again to lead these people on the right path through his example and work.

So he went his way, the way of his mission to help sick people. This goal was always in the foreground. Bruno Gröning was also able to expose people in a non-violent way, which nevertheless had an effect, so that some turned hostile against him. People just cannot bear the truth or only with great difficulty, they want to evade the truth, they want to go the broad way and not the narrow way of service, some renunciation, patience, kindness, mercy, divine love and the everlasting wanting to help.

So while Bruno Groening always wanted to be there for people, a lot of injustice was done to him. The envy against him was immeasurable. The newspapers carried big reports against him, others wrote for him. When false reports surfaced, he remained silent and did not use violence. His tolerance was admirable. He fulfilled his mission by helping people until shortly before his death. He knew exactly when his time was up. And miracles that are not miracles happened almost to the end.

In the press it was reported e.g. that he died as a result of throat cancer. Much more has been said, but just not right. In reality it was like this: Bruno Gröning bore the sufferings, illnesses, hardships and also the sins and debts of other people up to his last hour. His way was a way of earthly crucifixion. But he didn’t talk about it in general. He said to the sick: “Give me your illness” And he spoke of seemingly unimportant things in order to divert people’s concentration from him so that he could relieve them of the disease.

So in a genuinely Christian sense he carried a large part of the darkness that has spread in the disease-ridden world. His goiter was not a goiter in the usual sense, but an enrichment of strong healing powers. He has never had goiter surgery.

He served as the healer of the people, and therefore it is wrong to claim that he died of real cancer. What he took in and carried from the others caused a change in his organism, it produced an internal burn. This condition left even the doctors speechless, because he was in no pain, could eat and give lectures. You didn’t notice him at all, at a time when doctors were already calling him a terminally ill person. These doctors had been Bruno Groening’s friends for many years. And he allowed these two Parisian friends to examine him in order to leave behind documentary records about his real state of the world. These documents are in my possession. Bruno Groening was only bedridden for the last three days before he went home, and he passed into eternity completely calmly and without a fight. This happened precisely at the moment when people would have obviously succeeded in preventing him from fulfilling his divine mission. On January 22nd, 1959, four days before his death, the process of vital importance to Bruno Groening was brought to an end in Munich. The prosecutor again asked for a prison sentence.

It can already be seen today that the divine power that he brought back to earth, to which he in turn opened the door – he often said: “This power and teaching is not new, it is ancient” – continues to have an increased effect . This power has not weakened because there is a life after death. Even if Bruno Groening is no longer physically among people, it is more so mentally and spiritually, as a servant of health, as a servant of God, as a mediator of divine, healing power. So it is not necessary to see him in person, because if you adjust to God, to the divine healing power, Bruno Groening as a servant can continue to give this power to friends and strangers alike !

So people should adjust to the divine stream. They should take him into their hearts, Bruno Groening will be one of the invisible helpers and mediators. From the heavenly gate one will be able to perceive God’s help more and more.

IT HELPS, IT HEALS THE DIVINE POWER” 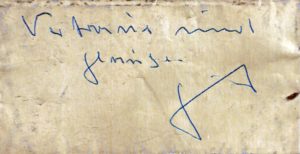 Archive of the Bruno Gröning Foundation