Letter to brother Bruno Groening from his sister Maria Sonnenberg, 09/30/1948

give yourself under oath instead of what you have worked great in the field of clairvoyance and in medicine for great miracles, which as far as I know are only unique. To be brief here, I just want to put the major miracles that you have worked here in writing. First of all, I would like to say in advance that you already saw a lot in advance of my dear brother Bruno as a child, such as: In the war of 1914/18 the fate of your siblings, parents and mine, as well as many, many other people. Everything happened just as you always predicted it would.

As for the last war, you have been predicting years ago, the beginning of the war was correct for the day and hour, the end of the war was also correct for the day. The consequences of the war also happened as you said before, also that we have to leave our homeland, etc. has also arrived. We did not follow your advice to flee months in advance, you also knew this and told us that we would be driven almost naked from our homeland and that our lives would be in danger. In order to remedy this evil (danger) you have commissioned me to protect all our family members from this disaster. You really said:

Our homeland will succumb to the enemy under greater fire and you would let miracles work what no other person is able to work such great miracles.

Thereupon you gave me the order I should be calmly and calmly in the event of the greatest bombardment and I would not be injured in the slightest by any of these bombs and grenades, I actually did this in exactly the same way when I served my post and I am completely unharmed got through the biggest shelling and hail of bombs.

Furthermore, I received the order from you to do the same with all our family members. Here, too, I would find that nothing will happen to anyone who is near me. In fact, it was also the case here, the bombs and grenades only crashed around us and nobody was injured in the slightest, we were also taken under fire by the Russians so that the bullets flew around our heads, and no one was hit here either still hurt somehow. Everything went as smoothly and safely as you told me months before. Everything happened exactly the same way we were actually able to move around freely under their greatest attack without the fear of being hit.

I could actually enumerate many such miracles that have also completely come true. But I would like to mention that you gave our brother Georg and my son Heinz the same thing at the front. These two also had to confirm the same thing to me and to you that everything happened exactly there as you had told them in advance in my presence. I would also like to give you, dear brother, the confirmation that I found my son Heinz exactly on the day you (…) told me 3 years in advance. All in all, everything has completely come true, I can say with the greatest certainty that you alone are the greatest miracle person of all time, it is not all that you have already achieved great things, including as a great miracle doctor. I would like to mention only one case in which you told your wife that the two breasts that were severely and feverishly inflamed and were already the size of a child’s head that you had restored to normal in exactly 3 minutes, which yourself was in a high fever, is definitely unique in the world. I can say the same about myself when I had a severe chest ailment where even the doctor failed and could no longer give me any help that you had this great ailment for me

healed in a few days without touching the chest. It would be going too far to go into all the details. I am firmly convinced that you, my dear brother Bruno, can continue to perform such great miracles in your further life and I wish you the best and greatest successes in the field of your great and unique strength. A second person like you has yet to be born. At the end of my statements made here, which I have given under oath, there is no doubt, as improbable as it may sound to me, you, my dear brother, are the greatest wonder man of all time. May the Lord God continue to strengthen you in your strength so that you can still help and heal many people who are of good will, while punishing bad people according to the size of their wickedness. (… ..) even your words may sound like a lot

Many people see it as crazy, so true and certain that every syllable you utter will prove to be true, of which one will be convinced earlier and the other later.

Copy of statement by Gertrud Gröning about her husband Bruno

Copy of the original in old German script

I hereby declare in lieu of oath that my husband Bruno Gröning in our (20) twenty-year marriage has predicted very very much, i.e. everything that he predicted, has come true to the day and hour.
In short, my husband has done the same in all areas as I know about the story of Rasputin. My husband has also achieved a lot and great things in medicine by healing wounds or great ailments in minutes.

He also worked many such great miracles on myself, so that I can only say, as far as I know, that this great power may only be granted to my husband alone.
I wish my husband in this way that he maintains his strength and convinces everyone of it as I am since twenty years.
My husband had received well over 100 such confirmations from people which  unfortunately got lost with all our belongings when the Russians moved into Danzig. I am fully convinced that my husband will be able to acquire such confirmations again through his knowledge and skills. 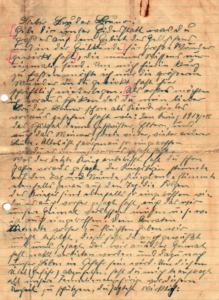