Healing Experience: Healing of poor vision
Terry R., AUSTRALIA
March 2012
I first started wearing prescription glasses in my early to mid-twenties for reading. In my early thirties my long distance vision also deteriorated and I had to wear glasses all the time, after a few years of dealing with two different pairs of glasses, I opted for multi-focal lenses. Without my glasses I could not see clearly and only took them off to shower and go to sleep at night. 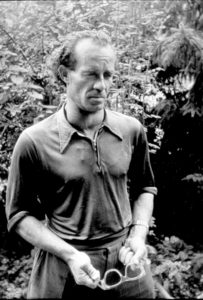 I was introduced to the teaching of Bruno Gröning in April 2009 after seeing a little add in the local paper. Since the introduction I started to tune-in to the Healing stream regularly and purchased every book in English written about Bruno Gröning. As my understanding of the teaching grew and expanded my mind, I became convinced that I was on the right path.
One evening, on October 24, 2010, while absorbing the Healing Stream I felt it as if a wave of energy was filling my entire body, and then I had an amazing experience. I felt that a fire-ball of white light with a golden edge, was revolving and glowing behind my eyes, and it seemed to lighten up the whole of the inside of my temple. Then I received a message, like an inner voice, emanating from this light, which said, “You are healed, do not put your glasses on again.” I was sure this message came from God.
When I opened my eyes the whole room glowed with light and everything was crystal clear. I then stood up, and since I normally take off my glasses while absorbing the energy; I did not put them back on as usual, but went to get a book with small print and started reading it without any problem, I felt elated as I became convinced that I had just received an extraordinary healing, I kept reading and reading from everything I put my hands on and could successfully see and read everything clearly.
I couldn’t contain my excitement and kept saying to my wife “I can read, I can read and see perfectly.”
As I was very excited and overcome with emotion I found it very difficult to get to sleep that night. The healing stream seemed to be continually flowing through my body. The next morning when I got up I went directly to pick up a book, and began reading without my glasses. Perfect sight once again! We always go for a walk along the beach first thing every morning, so I borrowed a pair of my wife’s sunglasses (as mine clip onto my prescribed glasses) and once again, no problem;
I could see perfectly. I could read all the signs in the street, number plates of cars and see people from a distance and close up walking along the beach. I looked across the ocean to the horizon and thanked God and Bruno Gröning for this wonderful event, as tears welled up in my eyes. That day I drove to and from work wearing my wife’s sunglasses and carried out my normal work duties, which consists of reading of files, computer work, filling out forms by hand and reading architectural plans, without wearing glasses. By the end of that day a great feeling of thankfulness invaded me and I felt very close to God and Bruno Gröning.
The following morning the Regulation process started when I was at work, with several bouts of diarrhoea and nausea, but my eye-sight was good and my spirits high. This continued for three days, but strangely enough only when I was at work, never at home. Then this stopped.   On November 2010 I was due to renew my driver license, this had previously been issued with the specific condition of (driver with glasses) and it reads on my licence as “special condition S” (‘S’ for spectacles).
So I decided to go earlier on November 11, 2010 to see if this condition could be deleted. When called to the counter at the Motor Registry Office, I explained to the employee, that I did not complete the question regarding the wearing of glasses on the form because I have had a healing and no longer need to wear them. She looked at me for a few seconds and then said I had to do an eye test and asked me to look at the mirror on the back wall and read the third line of letters, I did this without any difficulty and I now hold a licence without any conditions or restrictions.
Once again I was so elated that I went to purchase a new pair of sunglasses, as I had been improvising by wearing an old pair of glasses with the lenses removed and the sunglass section clipped over.
The next day I began to feel feverish and dizzy, with spells of blurriness, so that at times I saw double. This again, only occurred at work, when I was dealing with clients or colleagues, but only sometimes and never while alone nor at home. At some of those times I felt as if something was telling me that I have not been healed really and was urging me to put on my glasses.
I mentally responded to this by affirming my belief in my healing. I knew that this was a negative force who was trying to rob me of my healing and that if I put my glasses back on (if only for a short time to finish what I was doing) I would lose my blessing. Then as soon as I could when this happened I would step out of the office and look at the nearby trees and sky and ask Bruno Gröning for help and immediately felt reassured that everything was in order. I would then go back into the office and continue my work without difficulty. This lasted for about three weeks then vanished and only on rare occasions did my vision become blurry.
The Regulations completely ceased after this period of time and since then the colour of my eyes is no longer faded but again a clear blue like when I was a young man.   An ophthalmologist did a series of tests and confirmed my vision as normal.
I feel deep gratitude in my heart and thank God and Bruno Gröning for this wonderful healing